What is Mother's Day?

Mother's Day is a special day honouring mothers and it's celebrated in loads of countries throughout the world. It is also known as Mothering Sunday in the UK.

This year, it will fall on Sunday 22 March.

Read on to find out more about where the tradition of Mother's Day in the UK came from.

We also want you to let us know what you're planning to do to mark Mother's Day this year: Give a Mother's Day shout-out to someone special.

And if you're looking for ideas try our Mother's Day presents you can make at home. 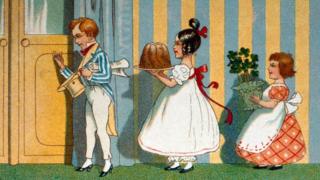 Getty Images
This illustration from 1908 shows three children about to surprise their mother for Mother's Day - the eldest of the three knocks at the door and will read a poem, the second one is carrying a cake for her, while the youngest is bringing a gift of a jar of four-leafed clovers

During the Middle Ages, the custom developed of allowing people who had moved away from where they grew up to come back to visit their home or 'mother' churches, and their mothers, on the fourth Sunday of the Christian festival of Lent.

At the time, it wasn't uncommon for children to leave home to work when they were just ten years old, so this was an opportunity for families to meet up again.

Although it's often called Mother's Day in the UK, it has no connection with the American Mother's Day.

Mother's Day in the US

In the US, Mother's Day is celebrated on the second Sunday of May each year.

The idea started in America when a woman called Anna Jarvis held a small memorial service for her own mother on 12 May 1907.

Soon after, most places in America were observing the day and in 1914, the US president made it a national holiday, celebrated on the second Sunday of May.

Lots of other countries celebrate Mother's Day at different times of the year as well. 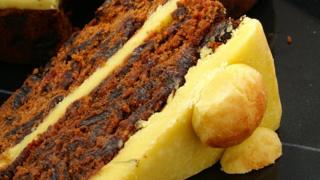 The food item traditionally associated with Mothering Sunday is Simnel cake - a type of fruit cake with two layers of almond paste (one on the top and one in the middle).

These days, Simnel cakes are more usually linked with Easter.

Mother's Day presents you can make at home

Mother's Day: Give a thank you shout-out to someone special