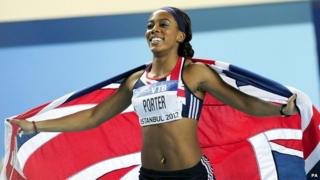 American sprint hurdler Tiffany Porter has been tipped to captain Team GB at the London Olympics this year.

She was born in the US but has a UK passport because her mother is British, which allows her to represent the UK at the Olympics.

A newspaper has suggested she 'isn't British enough' because was born and grew up in America. She even represented the US at the World Championships only last year.

Some people think she only chose to represent Team GB because she wasn't good enough to make the US Olympic team this year.

Olympic hopefuls who were not born here have been named "plastic Brits" who only use their British nationality when it suits their career. 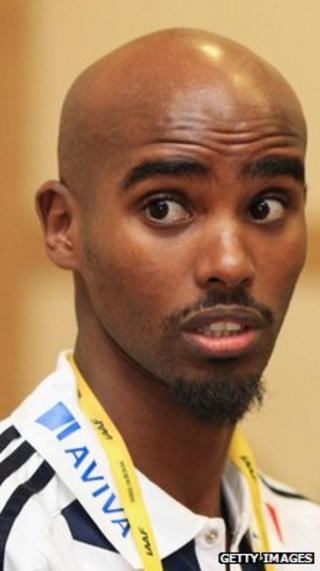 So what do you think makes a person British?

Record-breaking athlete Mo Farah was born in Somalia but he moved to England when he was just 8.

He's spent most of his life in the UK, went to school in England and trained as an athlete here. He's one of Team GB's biggest stars, one to watch at the London Olympics - so you don't need to be born in the UK for everyone to see you as completely British.

Yamile Aldama has won medals for Britain at the World Championships but was born in Cuba.

She represented Sudan for six years but then married a Scottish man and was given a UK passport. Should she be allowed to represent Team GB?

"I think the British public believe anything the media tells them, which gives them negative opinions about non-British people representing Team GB at the Olympics."

"It would be okay if she had spent most of her life in Britain, which she hasn't, so she can't really represent Britain then."

"I think she should be allowed in because she is a really good runner."

"I think that as long as you are currently living in Great Britain at the time of the Olympics and you have a British passport then you are fine. It doesn't matter that she competed for America before, the Olympics are happening now, in 2012."

"I think that if you're a good team player and a kind and honest person it shouldn't matter where you come from."

"People who have a British relation or have grown up in Great Britan should be allowed to play for team GB."

"I think that anyone should be able to represent the GB team. I mean, the whole thing about the Olympics is not only to compete for the best, but it's also for people to unite together. It doesn't matter where you come from as long as you want it!"

"I think that if she's good enough the people of Great Britain should be happy and proud that we have such an amazing runner that is captain for our team."

"I think that the athletes should have their own choice of who they represent, as they can't choose which country they were born in."

"I think that she should be allowed to compete for Britain, but I don't think it's a good thing that she competed for America last year and is now competing for Britain. She should make her mind up."

"It depends why she isn't representing America. You can't chop and change, you have to be loyal to your team through thick and thin."

"I think you should be English to be a part of Team GB, otherwise it isn't GB if people from other countries are in it."

"I think that she should not be allowed to be part of the GB team because she represented USA last year at the World Championships."

"I think that they should be allowed because people from different countries are part of what makes Britain... well, Britain."

"I think that if you want to represent GB then you need to be British. There are many Britons who want to represent Britain and never get the chance because someone from another country will have taken their place."

"I think that to play for Great Britain you should be born in the UK, be a British citizen and have a UK passport."

"I think if you want to be in Team GB you can, but you have to stay in it."

"No they should not represent England if they are NOT British."

"I think foreign people should be allowed in the GB team because what does it matter? Anyway there are loads of foreign footballers who play for English teams so what's the big deal?"

"I think we should be proud of the fact that foreigners are representing us. Not all of our athletes are foreign but the ones who are show that they are proud to represent Great Britain!"

"I think she should be allowed because we need more people to run and I think she will get us gold."

"I think people who are not from Britain should be allowed to take part in Team GB, because there might not be enough people in Britain who do the sports needed for the Olympics."

"You should be able to participate in the Olympics if you have lived in the same place for a period of time, like six months. Everyone should get their chance to have their moment in the spotlight."

"If they get the medals for Team GB why are we complaining?"

"I don't think it's fair because she's not British. I think someone who comes from Britain should do it!"

"It's their choice to run for their own country or our country! But they should only be allowed to be in the team if they have been in this country for a certain time."

"Just because they come from another country doesn't mean that they can't join Team GB. Everybody should have the right to join Team GB if they have the skills."

"I think even though these athletes aren't fully British they should still be allowed the represent GB if they have been raised or have lived in Britain for some time."

"I think that Team GB should be grateful that she has trained really hard to be a sprint hurdler and participate in the Olympics. She should be counted as 'British enough'."

"People that represent Great Britain should be born and bred in England. People born in a different country should not be allowed to be part of Great Britain's Olympic team."

"I think athletes from different countries should be allowed to compete for England because maybe they have relatives here and they'll want to compete for them."

"I think it's fine that Tiffany Porter can represent us in the Olympics, she's a great sprinter and hurdler."

"Well I think they should be allowed because they are no different from us, they only moved here."

"I think that she should be allowed to compete because she's a British citizen and we shouldn't be separating each other!"

"I think that they should be allowed to, but only if they want to."

"I think that people from other countries should be a part of Team GB because there are not enough people in Great Britain who do their sport."

"I think she shouldn't be allowed to participate for Team GB because she participated for America only last year."

"In football it doesn't happen and that's a sport, so why should it happen anywhere else?"