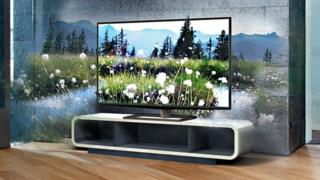 A new spec-free 3D TV, that tracks the movements of viewers' faces, has hit UK shops.

The 55in Toshiba is the world's first large-screen, glasses-free 3D TV available in our shops. Start saving now though: it'll cost almost £7000!

Like some digital cameras, it can recognise and follow faces. So when you move, it adjusts its picture to suit.

It then directs different images to the left and right eyes. This creates the illusion that the image is 3D.

Two were launched at an electronics show in Japan in October 2010 but had much smaller screens at only 12 inches and 20 inches.

But these early models saw problems with picture quality if viewed at an angle.

Now other manufacturers will be keen to enter the spec-free battle - with Sony displaying two impressive prototypes at the Consumer Electronics Show in January.