A solar storm that was worrying scientists has passed by Earth without causing problems.

Experts say the storm had little effect, with only some planes having to change route around polar regions.

Some had been worried that the solar activity would cause big problems for power grids and satellites.

But instead it did mean that certain places in the world, like Canada and northern Europe, saw great displays of the Northern Lights in the sky. 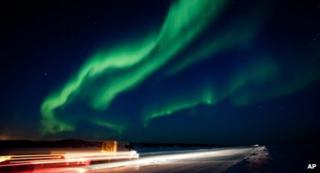 AP
Spectacular displays of Northern Lights could be seen as a result of the solar storm.

The solar storm - travelling at some 1,300km per second - began arriving at Earth on Thursday morning, after the two strong solar flares (explosions) were released from the Sun.

These solar flares are becoming more common because the Sun is approaching the peak of its regular 11-year cycle of activity.

It's expected to reach its peak of solar activity in late 2013, from when the flares will gradually die down once again.