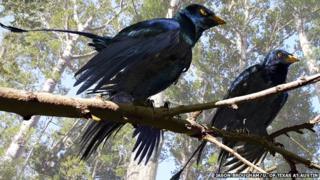 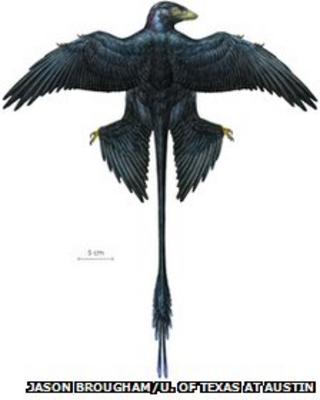 Other
Microraptor had four wings and a long, thin tail

Microraptors were four-winged, pigeon-sized dinos, related to Velociraptor, which lived in the Cretaceous Period around 130 million years ago.

Experts looking at fossils of Microraptor feathers have found that they were black with a slightly blue tint - much like a modern-day crow or raven.

They say it's the earliest example of iridescent colour in dinosaur feathers - suggesting that the feathers were used for display to attract mates, as many of today's birds do.

Iridescence is where a surface appears luminous, and the colours seem to change when looked at from different angles.

The team also showed that the creature's tail feathers were very long and thin, so these were most likely for show too, rather than to help with flying.

The study was published in the academic journal Science.