Huge dust whirlwind seen on the surface of Mars 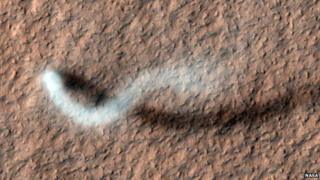 Nasa space cameras have snapped up this dusty whirlwind - known as a dust devil - on the surface of Mars.

The plume of the whirlwind reaches 800m high and 30m wide, and its dusty trail covers an area of more than 600m.

Just like on Earth, winds on Mars are powered by heat from the sun.

But this picture was taken in February by the Reconnaissance Orbiter, during the time of the Martian year when the planet's furthest away from the sun.

So even when Mars is at its coldest, it can still get some impressive whirlwinds like this!