Two solar flares (explosions) on the Sun's surface have sparked the biggest magnetic storm the Earth has experienced in five years.

A huge cloud of solar particles is speeding through space towards us and could disrupt power grids, and some planes may have to change their routes around the polar regions.

It might affect satellites too, sending sat nav systems haywire!

The storm is not harmful to humans though and all this activity means we might be able to see the Northern Lights in our skies tonight. 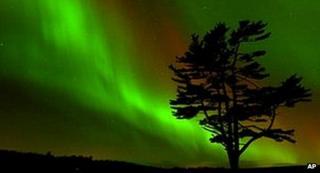 AP
The Northern Lights or aurora borealis, rarely seen in the UK

The US space agency Nasa spotted two solar flares coming from the Sun on 6 March.

These solar flares are becoming more common because the Sun is approaching the peak of its regular 11-year cycle of activity.

It's expected to reach its peak of solar activity in late 2013, from when the flares will gradually die down once again.