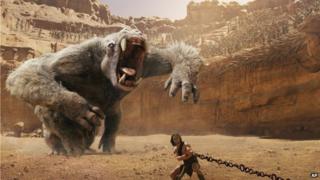 John Carter is a 3D sci-fi adventure set on Mars. It's the film of a book written 100 years ago by Edgar Rice Burroughs about a man who accidentally gets magically transported to the red planet and gets caught up in a massive war between the alien tribes that live there. Our review man Joe went to see what it's like.

John Carter is a gold miner living in the American desert during the Civil War era.

Whilst looking for gold he discovers a magic portal that sends him to the planet Mars where he discovers loads of different aliens who are fighting each other for power.

The gravity on Mars gives him the ability to run, jump and fight like a superhero - which comes in handy when he falls in love with an alien princess and tries to save her.

You might recognise the actor Mark Strong who was Sinestro in the movie Green Lantern (2011). In this one he plays an evil baddie.

Another big star you'll have heard of is Willem Dafoe who was Gill the fish in Finding Nemo (2003). But you won't recognise him in this as he plays a 12-foot green alien!

If you like your sci-fi films jam-packed with weird aliens then this is for you! As well as the 12-foot green ones, there are giant bear-like monsters and fat little dog-style creatures. There is lots of cool action which in 3D looks pretty amazing.

But it's also quite complicated and it took me a while to work out who was who as some aliens look the same and have some really strange names.

There is also a lot of talking for a big action film like this which can be a bit boring but you'll need to concentrate because otherwise you won't know what's going on!

Overall I'd say it's a hit and the ending is really good and makes you want to watch more.