Velociraptor's last meal shows it was a scavenger too 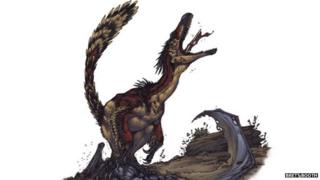 Scientists have discovered the remains of what a ferocious velociraptor ate for its last meal.

The bone of a pterosaur was found inside the dinosaur's stomach when scientists unearthed its remains in the Gobi desert, in Asia.

Dr. Hone, who worked on this discovery, says it's a rare find: "Gut contents are pretty rare and pterosaur bones are rather fragile and don't preserve well, so it is an unusual find."

But the velociraptor was only 50cm tall and the pterosaur was bigger - a flying reptile with a wingspan of at least 2m.

So it's thought the pterosaur must have been ill or injured - that's why the small dinosaur was able to munch at something a lot bigger than itself!

Velociraptor has often been portrayed as a pure hunter, killing its prey - but this shows that they probably scavenged on dead or dying prey too.