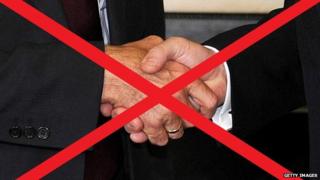 British athletes are being advised not to shake hands with rivals or VIPs in case they catch a bug that could ruin their chances at the Olympics.

The British Olympic Association say a mild bug which could knock athletes off their stride could be picked up in the "quite stressful environment" of the Games.

"It is all about hand hygiene."

A history of handshakes

The handshake is thought to have originated as a symbol of peace between soldiers to show that neither was carrying a weapon.

Archaeological ruins show handshaking could have been practiced in ancient Greece as early as 5th century BC.

In Austria you should shake hands with everyone on meeting, including children.

In China it's polite to shake the hand lightly, sometimes for as long as 10 seconds.

In South Korea, a senior person starts the handshake and a sign of respect is to grasp the right arm with the left hand, too.

Former American president John F Kennedy commissioned a survey on hand shaking, to make sure he got it just right when greeting other world leaders.