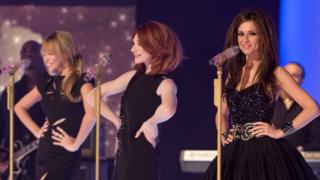 Now that Cheryl's ruled out an X Factor return, could she be planning something else?

Former Girls Aloud band-mate Nadine Coyle has told journalists the group will reunite to mark their 10th anniversary next year.

Nadine said it was "time to come back" and the band will be doing a tour and releasing "one or two singles".

The group formed on Popstars: The Rivals in 2002 and had chart success before taking a break in July 2009.

Since then Nadine, Nicola Roberts and Cheryl Cole have pursued solo careers in music, while Kimberley Walsh and Sarah Harding took up careers as actors.