Up to 900 species of tropical bird 'could go extinct' 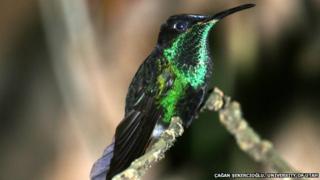 Up to 900 species of tropical bird could become extinct in the next 90 years, say scientists.

It's because of climate change - if temperatures rise some of these animals would find it hard to adapt.

A lot of tropical birds aren't thought to be good at moving to new places to live.

So if areas that are suitable for them become smaller or change, then some birds won't be able to move their homes quickly enough to survive.

Mike Crosby from Birdlife International, an organisation that helps birds, says humans may need to help in moving the animals to new locations.

"We might have to take novel conservation measures in the future such as translocation of birds from one site to another."

This might sound bad, but scientists say birds are one of the least threatened groups of animals by climate change. Other animals could be even worse affected by rising temperatures on Earth.