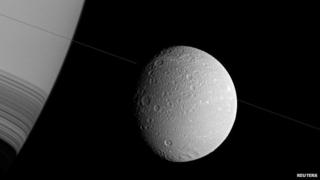 Oxygen has been detected around Dione, one of Saturn's icy moons.

The discovery was made by Cassini, an unmanned Nasa spacecraft, which flew by the moon almost two years ago.

It's an important discovery, as oxygen is vital to support living things.

Scientists reckon more moons around Saturn and Jupiter could also have oxygen in their atmospheres. They also think some of the moons have liquid oceans deep below their surfaces.

With the possibility of both water and oxygen, experts hope to explore the moons further to see if there are any signs of life or if humans could survive there.