Engelbert Humperdinck has been revealed as the UK's entry in this year's Eurovision Song Contest.

He hasn't had a top ten hit since 1969 but he's been singing for 45 years and has sold 150 million records all over the world.

At 75, he's the oldest person ever to enter the Eurovision Song Contest.

He'll face competition from younger acts like Jedward, who will represent Ireland for a second year with their song Waterline.

Who is Engelbert Humperdinck? 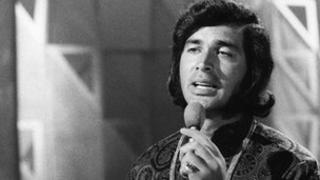 It's hoped Engelbert will really stand out from the crowd and will scoop up votes from older viewers.

His song will be written by award-winning producers who have worked with Adele and Lana Del Ray, so Engelbert is in safe hands.

The UK last won the Eurovision Song Contest in 1997, when Katrina And The Waves came top.

We haven't done quite so well recently and last year's act, Blue, did worse than Jedward!

This year's final will be held in Baku, Azerbaijan on Saturday 26 May.