World's most valuable coin goes on display in London 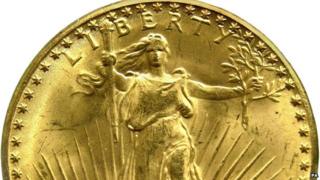 One of the world's most expensive coins is on display in London.

It's an American gold Double Eagle coin from 1933, engraved with an image of Lady Liberty. It says 20 dollars on the face but is worth much more now.

An identical coin was sold at auction in 2002 for a record $7.5 million (around £4 million). It's worth so much as it's incredibly rare.

Half a million coins were made, but none of them made it into circulation.

Most were immediately melted down by the American government because the value of the gold became higher than twenty dollars.

You can see the coin at the Goldsmith's Hall in London as part of its tour around Europe.