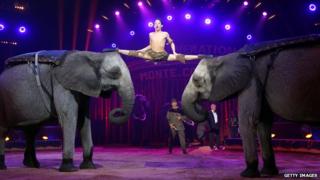 The government's promised to ban the use of wild animals in travelling circuses.

Last year, MPs said they wanted a ban after being upset by video of a circus elephant being mistreated in the UK.

Until a new law is passed, circuses will need to have a licence if they want to keep animals and will be visited by an inspector.

It's thought between 35 and 50 wild animals work in circuses in the UK.