Asteroid spotted with 1 in 625 chance of hitting Earth 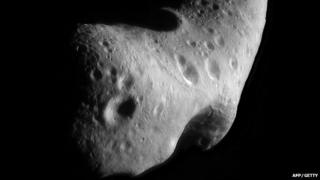 Scientists are keeping a close eye on an asteroid, called 2011 AG5, which might be heading towards Earth.

The 140 metre wide space rock was first discovered last January, by scientists using a telescope in the Arizona desert.

Experts think the rock currently has a 1 in 625 chance of hitting Earth in the year 2040. That's quite small.

It's still 91 million miles away and scientists think they'll have a better idea of where it's heading next year. 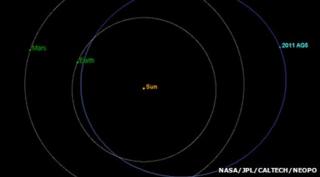 Other
This diagram shows how far away the asteroid is.

Don Yeomans from Nasa's Near-Earth Object Program reckons it's unlikely the rock will hit Earth, saying: "I fully expect we will be able to significantly reduce or rule out entirely any impact probability for the foreseeable future."

Last month, a much smaller rock called 2012 BX34 flew within 66,000 miles of Earth. That was the one of the closest passes ever recorded.