Venus' day gets even longer as its spin slows 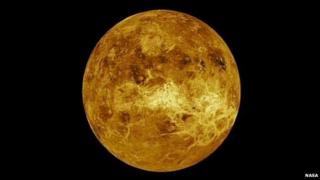 Venus is spinning more slowly and astronomers don't know why.

But now, the European Space Agency's Venus Express orbiter shows Venus' spin is getting even slower and a day on Venus is now six and a half minutes longer.

Scientists aren't sure why.

One cause could be Venus' thick atmosphere and high winds pushing against the planet's spin.

The new speed means some features on Venus will be 20 kilometres away from they were expected to be.