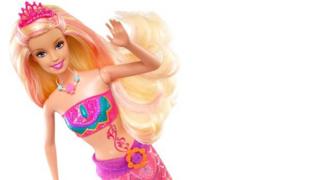 The number of dolls sold in Britain has rocketed.

Dolls like Barbie and the Monster High characters have overtaken all their rivals and are now back among the most popular toys on the market.

15 million more "fashion dolls" like Barbie were sold last year than the year before and taken together, £120 million worth of dolls were sold.

That might be surprising considering how many kids are into computer gaming.

The Monster High dolls are doing particularly well - selling more than any other last year. 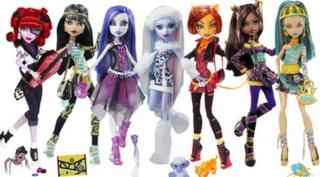 Other
The Monster High dolls are popular all over the world

We asked if you play with dolls or if you prefer other toys.

"I love dolls because you can tell them anything."

"I only had two dolls when I was younger but I like toy animals better, they're cuter and have more personality!"

"I like board games but I used to love Bratz dolls. I still play with my Polly Pocket dolls sometimes. I like playing my Xbox too."

"I usually play with toys like Buzz Lightyear, Lego and Playmobil. I do not like dolls (I am a boy) but I know a lot about toys and they look fake and like a silly fad."

"I really like playing with teddies, but not the way I used to when I was little. Now I love to make outfits by knitting and sewing. I even made my favourite one a little jumper."

"I have grown out of dolls now but I collect Blue Nose Friends and computer games. I also have the One Direction dolls!"

''I used to love cutting my Barbie's hair but now I'm older I enjoy things like playing outside or doing art.''

"I regularly play with Barbies, but I'm more into my hobbies and crafts."

"I enjoy playing with Barbie dolls, I even have a Barbie car. I like Monster High dolls now, although Barbies still remain my favourite."

"I used to have a few dolls but I wasn't very interested in them. I preferred Lego and reading."

"I don't play with dolls but I think there too expensive."

"I like to play computer games, games consoles and cuddly toys."

"I think Barbie dolls create an unrealistic view of beauty and make some kids self-conscious."

"I use to play with Barbie dolls as they let your imagination take control so you can escape reality."

"I used to love Barbies, it was such a 'must have' when I was young."

"I think Barbie dolls are brilliant, even though I'm 14. I think they are fun for the little kids and give them experience of looking after something special to them."

"I am a boy and I will never play with dolls in all my life!"

"I'm seven years old and I like playing with dolls. Barbies are my favourites."

"I used to love playing with dolls a couple of years ago, but now I play out with my friends more."

"When I was about five I would spend hours in my room playing with dolls, but nowadays I am on the computer 24/7!"

"I still play with dolls sometimes and I'm eleven years old, my twelve year-old sister does too. We like Monster High and Barbie, although we don't like Bratz as much now. If you ask me, you're never too old to play with dolls."

"I love the Monster High dolls."

"I used to collect dolls like people collect pennies and stamps, I especially liked Barbies! I stopped playing and collecting around the age of 7 or 8."

"I didn't use to watch TV, I always wanted to play with my dolls and I loved playing outside in the fresh air. All kids do now is watch TV and play on their computer games."

"Lego, K'nex, dolls, cuddly toys and computer games are our favourite things to play with here in the north of Scotland."