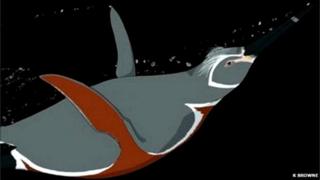 Other
The penguin had grey and brown feathers.

The fossil of an ancient giant penguin has been discovered by a team of scientists in Peru.

The penguin, known as Water King or 'Inkayacu paracasensis' would have lived on the earth 36 million years ago.

The bird would have been nearly twice the weight of an Emperor Penguin and would have stood at 1.5 metres.

And, unlike the black and white penguins today, the animal's feathers would have been brown and grey.

Julia Clarke, the palaeontologist in charge of the study at Reserva Nacional de Paracas said, "Before this fossil, we had no evidence about the feathers, colours and flipper shapes of ancient penguins."

The discovery is important because it shows that even though penguins' main features evolved millions of years ago, their feathers switched from brown and grey to black-and-white quite recently.