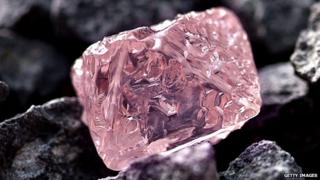 A rare and very valuable pink diamond has been found in Australia.

It's the largest ever found in Australia but the 'rough pink' diamond is only about as big as a pound coin.

The diamond is similar to one called the Williamson Pink, which was given to Queen Elizabeth II as a wedding gift in the 1950s.

It is thought to be worth millions of pounds but no-one will know its price until it goes on sale later this year.