Google could release futuristic glasses by end of year 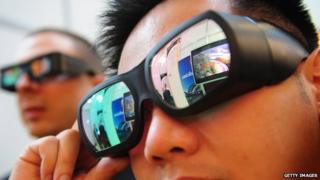 Getty Images
Will the gadget look like these 3D glasses?

Google is apparently developing new futuristic glasses that could spell the end for mobile phones.

The specs would have screens instead of lenses, to show text messages, emails and webpages.

The device would have a camera on, to allow you to see what your eyes would normally be looking at - you wouldn't actually see through the screens.

According to newspapers, the glasses could be available to buy by the end of the year.

A GPS navigation system is also thought to be part of the device and the specs could bring up information on your friends and well known buildings as you get close.

Although they may seem like something out of a science fiction movie, the glasses are believed to be part of Google's 'Google X' project.

The Google X team are in charge of developing world changing ideas like 'driveless cars'.