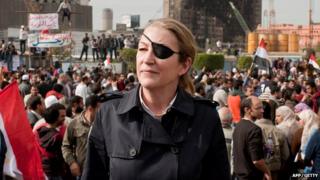 An American journalist covering the violence in the Syrian city of Homs has been killed.

Marie Colvin lived in the UK and was a war reporter for The Sunday Times newspaper.

Other people, including French photographer Remi Ochlik, were killed when the blast hit the media centre where the journalists were working.

Marie was the fourth foreign journalist to be killed in Homs this month.

She had been a foreign correspondent for the Sunday Times for over twenty years and reported from many war zones.

She lost her sight in one eye after being hit by shrapnel in Sri Lanka in 2001.

The Prime Minister, David Cameron said: "This is a desperately sad reminder of the risks that journalists take to inform the world of what is happening and the dreadful events in Syria."

Government forces led by the Syrian President, Bashar al-Assad, began attacking Homs on February 4th. So far, thousands of Syrians have been killed in the violence that shows no sign of coming to an end.