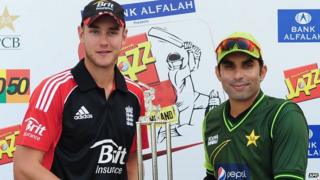 England's cricketers have been celebrating after beating Pakistan 4-0 in their one-day series.

They won by four wickets in the final match to complete a series clean sweep in Dubai.

The performance was a surprise after the side's awful result in the previous test match series which they lost to Pakistan 3-0.

They don't have much time to rest though, as they start their Twenty20 series later this week.

The boys put their bad form behind them and achieved only their third ever international series whitewash against a major team.

Batsman Kevin Pietersen helped to steer England to victory, scoring his second hundred of the series.

He said: "It was probably the best knock I've ever played in one-day cricket".