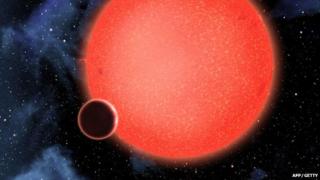 Astronomers have claimed the existence of a new class of planet: a "water-world" with a thick, steamy atmosphere.

The planet, named GJ 1214b, is bigger than Earth but smaller than a gas giant like Jupiter.

It was discovered in 2009 but finally, scientists using the Hubble Telescope reckon they've proved there's a large amount of water on the surface.

GJ 1214b is about 2.7 times wider than Earth's but with a mass seven times higher. It is much closer to its sun.

The planet's relatively short (40 light years) distance from Earth means it is in the running for follow-up observations by the James Webb Space Telescope, when it is launched by the end of the decade.