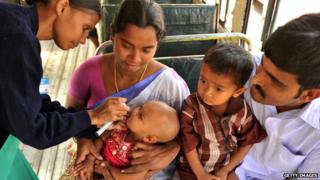 Medical experts think they could be close to wiping out one of the world's most serious diseases, called Polio.

The evidence comes from India where a campaign to stop children catching it has achieved almost total success.

That means children who've been given the vaccination - a couple of drops of medicine in the mouth - won't pass it on to others.

The polio virus attacks the body, making sufferers disabled, and in the worst cases people can die from it.

The number of people suffering from it has fallen from hundreds of thousands to just 650 last year. 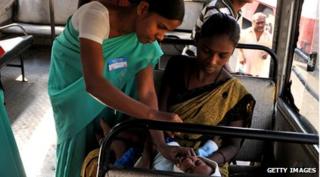 Getty Images
In just one weekend, 170 million children were vaccinated across India

Although the disease is still badly affecting some countries, like Nigeria, it has been almost completely stopped in India.

In India, people can easily see if a child has been protected because one of their fingernails is painted purple.

Nobody has caught polio in Britain since 1982.