Libby: My battle with anorexia 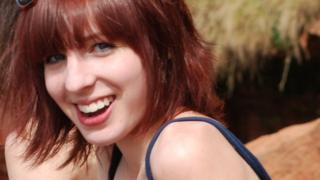 Libby is recovering from the eating disorder, anorexia. She contacted Newsround because she wants more to be done to tackle the condition. Here's her story in her own words.

At the age of 14, I was taken by a devastating condition: anorexia nervosa. I am now 16, still battling but find myself in a much better place.

I fell ill because of a combination of things. We had a sequence of close people die in a row.

Seeing everyone fall apart around me and trying to make everyone happy made me ill, made me feel worthless and hurt, so I guess anorexia was there when I needed someone, a distraction.

I was also a keen sports player, swam to high standards and competed every weekend.

The will power needed to train every day for various sports made me determined and stubborn, which actually aided the not eating.

Fed through a tube

I began seeing a psychiatrist ever week but within six months of seeing them, I was sent to hospital and stayed there for four months.

On three occasions, I was fed through a tube going through my nose into my stomach.

After that, I spent time in a psychiatric ward. I was allowed out but would be sent back if I didn't eat for two days in a row.

This is when I found the strength to fight anorexia. I had found it almost impossible to come to terms with it and felt like it would never ever leave me but eventually, as I became stronger, the anorexia began to become weaker.

Of course it is still a battle and may always be but I am now dealing with it, am fully on the road to recovery and finding more recovered every day.

Fighting anorexia was the hardest but the best thing I had ever done.