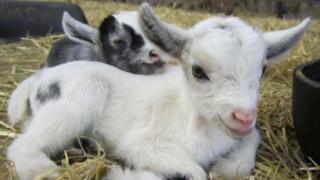 When you're next on a farm, listen carefully to the goats bleating because scientists reckon they might have different accents!

Researchers have been listening to pygmy goats, and think they change their sound depending on where they live and who they live with.

There are only a few types of animal thought to have different accents- they include humans, bats and whales.

The accents could be to help the goats identify others in their group.

Dr Elodie Briefer, who is part of the team behind the research, says: "This is especially important in goats, because they live in complex social groups that split during the day and come back together at night."