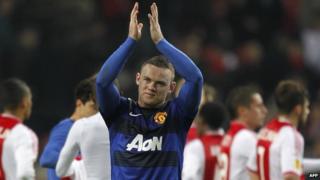 It wasn't the competition that they wanted to be in, but both Manchester teams still made a good start in the Europa League.

United won 2-0 away against Dutch side Ajax and City came from behind to beat Porto 2-1 in Portugal.

But the night was spoilt for City after they say parts of the crowd chanted racist abuse at their black players.

City say they are going to make an official complaint to European football bosses Uefa about it.

City and United are in the Europa League because they both got knocked out of the more important Champions League.

It was a disappointing night for Stoke who lost 1-0 against Valencia.

All the sides will play again in a second leg to see who gets through to the last 16.