Check out this super-old supernova! 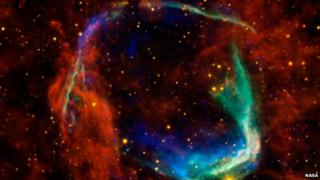 This amazing picture shows an ancient star which has exploded!

Scientists used four powerful telescopes to create the image of the super-old supernova.

It's catchily called RCW 86. It was seen exploding by Chinese astronomers back in 185 AD.

They wrote about a mysterious "guest star" which stayed in the sky for eight months. It's the earliest recording of a supernova.

Nasa experts have now managed to take this picture of all that remains of RCW 86.

It shows gas which has been heated to millions of degrees by the explosion.

RCW 86 is around 8,000 light-years away. That means that what we see in this picture actually happened 8,000 years ago!