Arsenal get hammered by AC Milan in Champions League 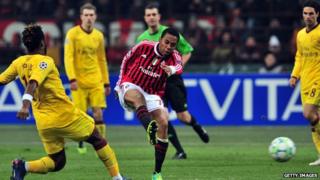 Arsenal's Champions League quarter-final hopes are in tatters after they were beaten by AC Milan 4-0.

The Gunners were hammered by the Italian team on Wednesday night in the first leg of the last 16.

Finally, Ibrahimovic's penalty brought the game to a 4-0 end, in what was Arsenal's worst European defeat.

Four years ago, things were different. Arsenal had become the first English side to beat AC Milan at their San Siro stadium, where this match was also played.

But last night's match was the first time in 222 European games (excluding qualifiers) that Arsenal have lost by four or more goals.