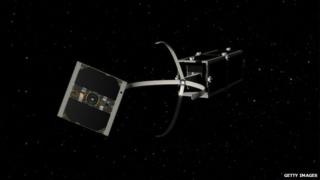 Swiss scientists have said they're designing a special satellite to clean up space junk.

It would be a bit like a vacuum cleaner, grabbing and destroying pieces of used rocket parts, broken satellites and other pieces of debris orbiting Earth.

The American space agency, Nasa, says more than half a million pieces of debris are orbiting Earth at a very high speeds.

If the junk is left alone in Space it's thought it could do serious and costly damage to valuable satellites or even manned space ships.

There have already been examples of when debris has collided with satellites and caused damage.

Scientists hope to launch a test space cleaner within five years and it would be the first of a number of satellites designed to do this job.