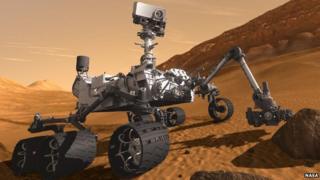 America says it's putting its missions to Mars on hold. Nasa's just announced that the money it has for exploring the Red Planet has been cut.

President Barack Obama has told scientists to concentrate on getting more humans into space.

Their Curiosity rover which was launched in November will still touch down on Mars as planned in August.

America has pulled out of two Mars trips it had planned with the European Space Agency (Esa) in 2016 and 2018.

Esa says it will still press ahead with the ExoMars missions without America. The unmanned spacecraft will bring back rock samples from Mars.

America is going to spend its money instead on building a huge new rocket to take astronauts to the Moon and asteroids.

Storm Ida: Flash flooding and tornadoes hit parts of the US

Ireland's men and women footballers to get equal pay