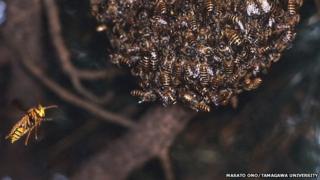 Asian honeybees shake their bodies to tell their enemies - bee-eating hornets - to buzz off and leave them alone.

Scientists watched bees as they guarded the entrance to their hive, shaking their bodies when a hornet approached.

Researchers were aware of the shaking, but now know the bees are sending a warning to the hornets with this signal.

To find this out, the researchers attached wires to live hornets and held them at different distances from the hive entrance.

The closer the hornet was held to the hive, the more the bee guards shook their bodies.

Then the team did the same with a butterfly species that looks similar to hornets.

But despite looking the same, the bees didn't respond to the butterflies, no matter how close they came to their hive.