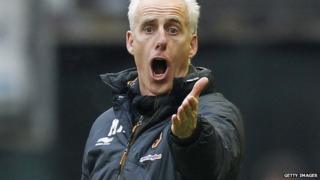 Mick McCarthy has lost his job as manager of Wolverhampton Wanderers after a poor run of results.

Wolves are sitting in the relegation zone of the Premier League, having won only one of their last 13 matches.

Favourites to replace McCarthy, who has been at Wolves for five years, are ex-Liverpool boss Rafa Benitez and ex-West Ham United manager Alan Curbishley.

We don't think Mick is in line for the England manager's job just yet though...