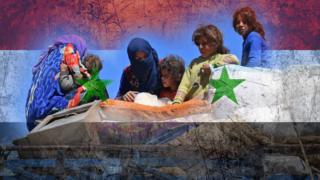 There's been a civil war in Syria for the last eight years, with different groups trying to seize control of the country.

The fighting has been between:

In the chaos of fighting between the government and anti-government fighters, IS took over large parts of Iraq and then moved into eastern Syria, where they were able to gain land and power.

By March 2019, IS had lost control of all the land they once occupied. More than 12,000 suspected IS members are now being held by Kurdish forces.

The situation is very complicated because other countries have got involved in the conflict.

The Syrian government's key supporters are Russia and Iran, while the US, Turkey and Saudi Arabia backed the rebels. The UK, France and other western countries have also provided varying levels of support to what they consider to be "moderate" rebels.

Fighting continues. Recently, the US removed troops from north-east of the country, which gave way for Turkey to launch a military attack against Kurdish-forces in northern Syria.

According to the United Nations (UN) - a group of countries working together to try to bring peace - at least 6.2 million ordinary people have had to leave their homes inside Syria, while another 5.6 million have left to go abroad.

Why did the fighting in Syria first begin?

Even before the conflict began in Syria, many Syrians were complaining about high unemployment, officials not behaving as they should do, and a lack of political freedom under their President Bashar al-Assad.

However, the event which caused the situation to develop into a full-blown civil war dates back to 2011, to the Syrian city of Deraa.

Local people decided to protest after 15 school children were arrested - and reportedly tortured - for writing anti-government graffiti on a wall. 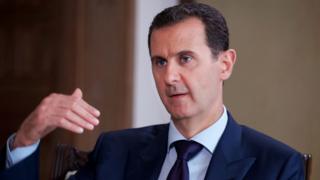 Associated Press
This is the Syrian President Bashar al-Assad

The protests were peaceful to begin with, calling for the release of the children, democracy and greater freedom for people in the country.

The government responded angrily and, on 18 March 2011, the army opened fire on protesters, killing four people. The following day, they shot at mourners at the victims' funerals, killing another person.

People were shocked and angry at what had happened and soon the unrest spread to other parts of the country. 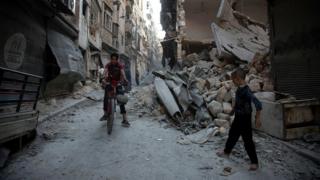 At first, the protesters just wanted democracy and greater freedom.

But after government forces opened fire on peaceful demonstrations, people demanded that President Bashar al-Assad resign. However, he refused to do this which made the protesters extremely angry.

President Assad still had a lot of people in Syria that supported him and his government, so they began to fight against people who were against the government.

In July 2012, the International Red Cross said the violence in Syria had become so widespread that it was in a state of civil war.

Who are the rebel fighters?

There isn't one single group of people fighting against President Assad and the government's army.

The group who want the president to step down - called the opposition - is made up of several kinds of people. These include groups of rebel fighters, political parties who disagree with Assad, and those living in exile who cannot return to the country. 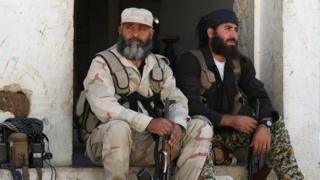 Right now there are a handful of groups remaining and the number of fighters has reduced as well.

How did Islamic State become involved?

It wasn't long before the crisis in Syria became more than just a war between people who are for or against President Assad.

In 2011, the group calling Islamic State (IS) joined the rebellion against President Bashar al-Assad in Syria, where it found a safe haven and easy access to weapons.

IS is a militant group with extreme, violent views, which has used this violence against anyone who doesn't agree with what they think. They have also persecuted other groups, including Christians and Yazidis.

In 2014, the group began to take over large areas of a country called Iraq, next door to Syria. Then, they moved into eastern Syria and - in the chaos of the war - they were able to gain land and power there too.

Raqqa was the first big city captured by IS in Syria in early 2014. The group went on take over large parts of the country towards Aleppo in the north, and along the Turkish border.

Both Assad's forces and the rebels were fighting a separate battle against IS at the same time as fighting each other.

To try to stop IS, in September 2014 the US used planes to attack IS fighters in Iraq. These attacks are known as airstrikes.

Just over a year later, UK MPs voted in favour of military action against IS in Syria too. The first airstrikes were carried out by RAF Tornado jets within hours of the vote in the House of Commons.

Towards the end of 2017, Syrian Kurdish and Arab fighters joined together - backed by America - to take back the city of Raqqa in the north-west. This ended three years of rule by IS which had made Raqqa its headquarters. 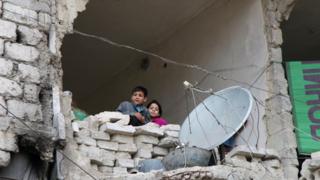 Following this, Syrian state TV - controlled by President Assad's government - said the Syrian army had retaken the city of Deir al-Zour, the largest city in eastern Syria. The Syrian Observatory for Human Rights, a UK-based activist group, said government forces had taken control of the city after weeks of fighting.

This was a big stronghold of IS in Syria, which showed how much IS had lost the control it once had. The city had been very important to IS because it is close to the border with Iraq.

But there was still some disagreement over whether IS had been cleared from the area completely. Syrian state TV reported that the city was completely free from terrorism, while other reports said the Syrian army and its allies were still clearing IS fighters from the area.

In March 2019, the US-backed Kurdish fighters in Syria declared military victory over IS. The Syrian Democratic Forces (SDF) (a group largely made up of Kurdish fighters) gained control of the town Baghuz, which was the final stronghold of IS.

This was a major moment in the fight against IS. At the group's most powerful, they controlled 34,000 square miles of land - approximately the size of the UK - stretching across Syria and Iraq.

Now, IS occupy a few hundred square metres near Syria's border with Iraq.

There are still concerns about IS though, as it is thought that some of its fighters are still operating in hiding.

Also, some believe that Turkey's recent invasion of north-east Syria risks the revival of the Islamic State group.

What has been the impact of the war on people living in Syria?

Millions of ordinary people living in Syria have had to escape from their homes to find somewhere safer to live.

According to the United Nations (UN), a group that works to try to solve some of the world's problems, more than five million Syrians have had to leave the country. Many have gone to neighbouring countries, like Jordan, Lebanon, Turkey or Iraq.

Turkey is the largest host country of registered refugees with over 3.6 million Syrian refugees living in the country. 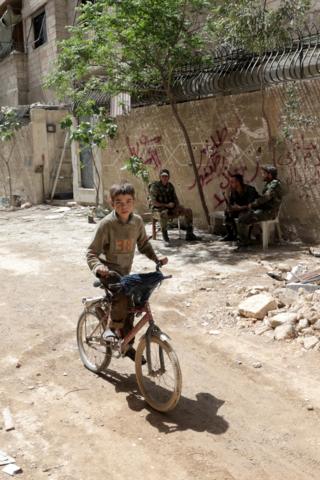 European Photopress Agency
Here, Syrian soldiers sit in the shade as a boy rides a bicycle in a town in Eastern Ghouta

By December 2018 the Syrian Observatory for Human Rights recorded that 367,965 people had lost their lives, including more than 120,000 ordinary people who aren't even soldiers or meant to be involved in the fighting. This figure doesn't include people who are missing or who aren't recorded though, so the actual number is thought to be much higher.

By February 2019, some 13 million people were estimated to be in need of humanitarian assistance, including 5.2 million in desperate need.

Lots of children can no longer go to school because their schools have been destroyed or there are no teachers where they have moved to.

When people are forced to leave the country where they live like this, they become known as refugees. The conflict in Syria has caused one of the largest refugee movements in recent history.

Many refugees made the decision to try to reach Europe. This is because some countries in Europe said they would accept refugees who wanted to start a new life here.

Millions of people both inside and outside Syria are in desperate need of help, but aid agencies say that getting help to people inside the country is very difficult and dangerous.

What else do we need to know about this war?

One other topic that has been talked about a lot is the use of chemical weapons.

There is an international law which bans countries from using chemical weapons in wars, as they are deemed too cruel to use on other people.

However, in August 2013, it was reported that they were used in the war in Syria, which caused anger around the world. Both the rebels and the Syrian government denied that they were responsible.

MPs in Westminster voted against responding to this with military action in Syria. But the US and French governments discussed limited missile strikes against military targets.

The process of destroying the weapons began in October 2013 and the people working on this project were awarded the Nobel Peace Prize later that month. 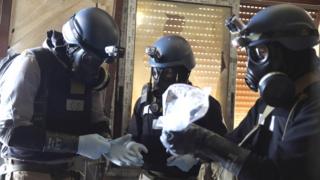 In April 2017, there was reportedly another chemical weapons attack on a town in north-west Syria, which killed and injured many people.

At the time, many weapons experts, the UK and other countries, and US President Donald Trump said President Assad's government was to blame for the attack.

But the Syrian President said he didn't do it and Russia, which supports him, said it was the result of aircraft hitting chemical weapons on the ground, which belonged to the rebels.

The US responded with military action by carrying out missile attacks on Syria, which the UK said it supported.

Another suspected chemical weapons attack took place in Douma in April 2018. Again experts blamed the Syrian government for what happened but both they and Russia said they didn't do it.

That led to most recent air strikes by the UK, the USA and France against what they said are Syrian government chemical weapons factories.

So what next for Syria?

It doesn't look like the fighting is likely to end any time soon, as there is still a big power struggle going on in the region.

There is a stalemate between the two sides. This means that the government forces and the rebel groups are unable to defeat each other or agree on the future.

And now Turkey has begun military action in the north of the country, causing more people to flee their homes.

Turkey's president Tayyip Erdogan has said he will "never declare a ceasefire" which would end the military action against Kurdish forces in northern Syria.

Turkey wants to push these forces away from Syria's border area.

The country is being destroyed by the conflict, including a lot of its rich cultural heritage. All six of the country's six Unesco World Heritage sites have been significantly damaged.

Lots of countries are trying to continue to supply aid, such as food and emergency supplies. But it is difficult when almost 3 million Syrians live in areas which are very difficult for aid workers to get to.

The rest of the world will continue to try to work out if there is a way to help Syria achieve peace. But for the time being, the conflict continues.

Was it right to fire missiles at Syria?

The important battle for the city of Aleppo