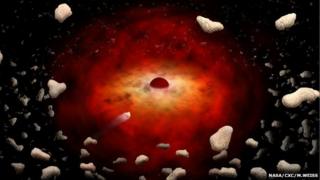 For years scientists have been puzzled as to why a giant black hole at the centre of the Milky Way has bright flares coming out of it.

Experts from the University of Leicester say they've found the answer in data from Nasa's Chandra satellite.

They say it's because the huge black hole, called Sagittarius A*, is vaporising massive asteroids.

But scientists say the asteroids need to be over 12 miles across to create flares big enough to be detected.

So there are many, many more smaller asteroids being sucked in that can't be seen.

The black hole's huge force rips apart any asteroid passing within about 100 million miles of it - that's roughly the same distance between the Earth and the Sun.

The pieces of rock are then vaporised, which is what creates the flare.

Nasa's Chandra satellite scans the skies looking for the X-rays given off by really high-temperature explosions and other extreme events in space.

It's so sensitive that it can study particles right up to the last millisecond before they get sucked into a black hole.

The flares that Chandra has detected coming from the black hole are actually flashes of X-rays, not visible light.

Scientists will continue to study Sagittarius A* for the rest of 2012 to try to find out even more about it.