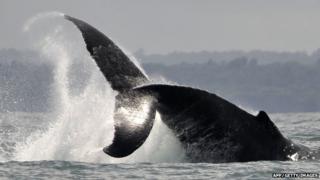 Whales can become stressed by noises from passing ships - that's what some researchers have shown, by studying the whales' poo!

A team of scientists collected whale poo in Canada's Bay of Fundy and measured the stress chemicals in it.

They found that stress levels got higher when there were more ships.

Noises from ship engines are at the same frequency levels as sounds made by some whales to communicate, which can be confusing for the animals.

Some whales have adapted to ship noises by changing the sounds they make.

Increased stress can be unhealthy for whales over a long period of time. The effects can include not growing properly and becoming less able to fight off illness.