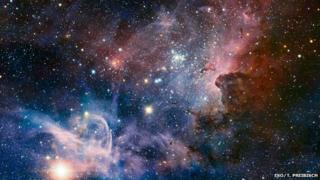 This is the most dramatic and detailed picture ever taken of a massive star formation called the Carina Nebula.

What is a light year?

This cloud of glowing gas and dust includes several of the brightest and heaviest stars known to astronomers.

Scientists made the image using the Very Large Telescope (VLT) in Chile, combining hundreds of smaller images to make this giant one, like a mosaic.

The nebula is about 7500 light years away from Earth, deep in the southern Milky Way.

The glowing light in the bottom left-hand corner of the pic is a star called Eta Carinae.

It's a really unstable, volatile star that scientists think will soon explode in what's called a supernova.

The nebula is pretty stunning under normal conditions but this image delves deeper through the thick clouds of dust that hide a lot of things away.

The scientists combined the VLT's power with an infrared camera called Hawk-I, which means the image shows a lot more than is normally visible with telescopes.

Just to the right of the centre of the image, you can see what look like several black dots with dark tails. These are like cocoons which contain newly-forming stars.

This is the most detailed image yet of the nebula, which is one of the most active parts of the night sky, creating many new stars over the past few million years.