Chimp is 'smarter' than most humans 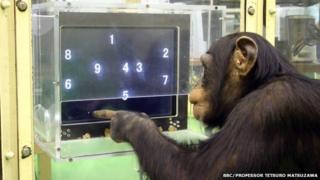 A chimp from Japan has been called a 'genius' after completing a computer memory test faster than any human.

Ayumu, who was born and raised in Japan's Kyoto University, can remember the position and order of a set of numbers in record time.

It take him less time to recall the sequence than it takes the average human to blink!

Ayumu has "study sessions" everyday, where he receives a treat every time he answers the test correctly.

But he's not the only clever ape around. 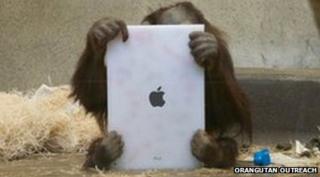 Other
The orang-utans love seeing videos of themselves!

Last Christmas a charity called in America began giving iPads to their orang-utans to play with.

The apes watched videos on the smart devices and played with the painting app.

Humans share 97% of our DNA with orang-utans and 99% with chimpanzees so it is perhaps no surprise that we have common interests!