Record numbers of dolphins stranded on US east coast

Loads of dolphins have been stranding themselves on beaches near Boston in America.

Rescuers at the International Fund for Animal Welfare (IFAW) say they don't know why it has started happening in 2012.

It's happening in a beautiful coastal bay called Cape Cod, and since January dozens of dolphins have been ending up there in water that's too shallow.

In less than a month, 37 were released back into deeper sea, but 92 have died.

One reason for the high numbers may be because dolphins swim in groups.

That means if one of them swims into shallow water, the others will follow.

It could also be because and they get caught in the tides in the shallow water. 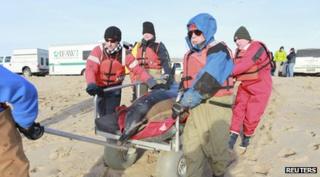 Reuters
Rescuers help the dolphins get back to the sea

Rescuers from IFAW have spent the last four weeks working hard to stop the dolphins from swimming near the shore.

Kerry Branon from IFAW said that when a large number of dolphins are seen in the bay, teams in small boats attempt to guide them toward deeper water.