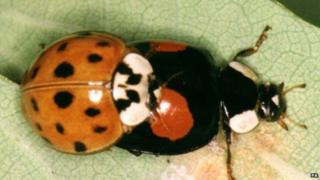 British species of ladybird are disappearing, and are being threatened by invading harlequin ladybirds from abroad, say experts.

Researchers found that seven out of eight British ladybird species have lost numbers over the .

But numbers of harlequin ladybirds - originally from Asia - have gone up.

The harlequin invaders are larger than the British two-spot ladybirds, and they're not as tasty to animals that try to eat them.

That means the harlequins are more likely to survive.

Harlequin ladybirds also share the same habitat as the two-spot, so they compete for the same food, and even eat the smaller two-spots.

The only British species not affected by the harlequin invaders are the seven-spot ladybirds.

They're safer because they live in different habitats to the harlequins.

If they weren't eaten by ladybirds, the aphids would eat plants that the Earth needs to work properly - and they can cause real problems for farmers' crops too.