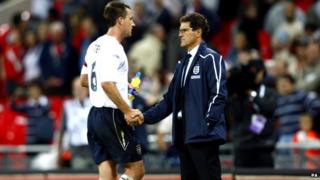 John Terry is facing a trial in court in July.

He is accused of racially abusing Anton Ferdinand of QPR but says he is not guilty.

On Friday the FA said Terry will not be allowed to be England captain at the Euro 2012 finals.

But Capello said he didnt think someone should be punished by sports authorities before the court had reached its verdict.