Otters have been given a tunnel and lollipop man

We've all seen lollipop men and women help us across the road - but now there's one for otters!

And a special tunnel has been made so otters can cross the road without being hit by cars.

Signs have also been put on the road in Herefordshire which warn motorists of the presence of otters.

When roadworks were needed to help with floodwater, workers also dug the special tunnel.

Each year more than 400 otters are killed on roads in the UK.

And in Devon, special cameras have spotted otters breeding in Exeter city centre. 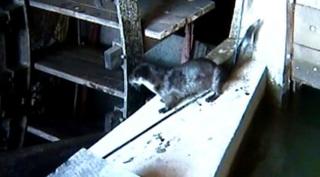 Spot the otter! This was seen by infra-red cameras in Exeter

Devon Wildlife trust has used infra-red cameras to look at otters which are now breeding again in Exeter.

In 2011, otters were seen in Kent, which means they are now back in every English county and - hopefully - saved from extinction.

Steve Hussey from the Devon Wildlife Trust was very excited with the results from the cameras.

"For the first time we've seen that otters here are breeding", he said.