John Terry is removed as the captain of England

John Terry is no longer the captain of the England footy team.

The Football Association have decided he should not be the captain because he has been accused of racially abusing another player.

Terry says he is not guilty of the charge. He's due to go on trial in July.

The bosses at the FA don't think it's right for him to be England captain for the Euro 2012 finals while he is awaiting the trial's verdict.

It all goes back to a match between Chelsea and QPR last October, when the Chelsea captain was accused of saying something racially abusive to QPR player Anton Ferdinand.

Terry denies that he did, and the trial to decide whether he is innocent or guilty will take place on 9 July, which is after the big Euro tournament in Poland and Ukraine.

The captain' s job was taken away from John Terry once before, when he was involved in a personal dispute with another player, Wayne Bridge. 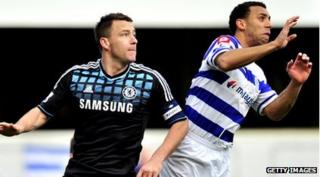 So now he's not captain, should John Terry be allowed to play for England? Until it has been decided whether he has done anything wrong, should he play for his country?

During the last World Cup in 2010, lots of people said England played so badly because of bad feelings amongst the team. If John Terry played in Euro 2012 - would the same thing happen again? You've been telling us what you think...

"Well they have no proof of this, they should let him play, not remove him without any evidence that he's done it!"

"I don't think he should be captain, he's getting on a bit and is off form."

"Gerrard should be captain because he has played more games and scored more goals."

"When a player is being accused of racism the honour of being captain should be taken away from him until the end of his trial."

"John Terry cannot go out onto a football field and racially abuse players. I am a Liverpool fan and Suarez got an eight match ban so I think Terry should too."

"He should still be captain, they haven't found him guilty yet, that's so unfair."

"He should play again because he's one of the best defenders in the world with a lot of experience in international football."

"He should still be captain because no ones else can organise a team for toffee!"

"Terry should be allowed to still be the captain because he has had the years of the experience and expertise to be in charge of the team."

"JT should retire from England squad. Lamps should take the arm band. Plus there are loads of new defenders up to replace Terry."

"John Terry is a disgrace to English football. He has been in the newspapers for the wrong reasons too many times. We'd be in a better place without him. Hart for captain!"

"I think we should keep John Terry because we will do better in the world cup with him!"

"If he doesn't play, England might not stand a chance. However, if he did racially abuse the other player then he should take responsibility for his actions."

"I really do think he should keep playing as he is one of the greatest players of all time and they can't say he's guilty if they don't have proof."

"I don't think this is fair for John Terry. He should be the captain of England team no matter what! If it wasn't for him England team wouldn't have gone this far."

"I don't think it should affect international football, it is a premiership issue."

"He should play because he is one of the best defenders in the world and that should not be taken away from him..."

"I think John Terry shouldn't play, because it would give younger players a chance."

"Yes, he should play because we don't have many good players! We need every player we can get!"

"I don't think this is fair for John Terry. He should be the captain of England team no matter what! If it wasn't for him England team wouldn't have gone this far."

"I think John Terry should play for England, the team wouldn't be the same without him!"

"I think he really should keep playing, he's fantastic and got to be the best England centre back there has ever been."

"He should play again because he's one of the best defenders in the world with a lot of experience in international football."

"Honestly, I think he should still be captain - they have not found him guilty yet and if he is found guilty, then they should judge whether he should be captain or not."