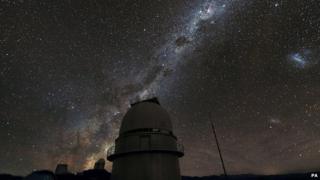 Astronomers say they've discovered a fourth planet outside our solar system that could support life.

It orbits a star called GJ 667C, about 22 light years away from Earth.

The star is less hot than our sun but the planet - called GJ 667Cc - is close enough that its surface temperature should be about the same as Earth's.

The planet's much bigger than Earth - about 4.5 times our planet's mass - but it orbits its star about every 28 days, so its year is about one Earth-month.

It could have water on it, too.

"This planet is the new best candidate to support liquid water and, perhaps, life as we know it," said Guillem Anglada-Escudé, one of the researchers on the project.

The international team made the discovery looking at data from the European Southern Observatory.

The first planet outside our solar system that might support life was discovered by French astronomers only last May and named Gliese 581d.

Then in August 2011, Swiss scientists found HD 85512b and towards the end of the year, Nasa discovered Kepler 22b, an amazing 600 light years away.

Though the temperature of the new planet might be suitable for supporting life, it will take further research to find out if it has any water.