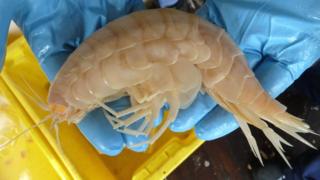 It's a bit creepy to look at - but this giant 'shrimp' is quite a discovery.

The underwater whopper was found over four miles down at the bottom of the ocean off the coast of New Zealand.

Called a supergiant, it's a type of crustacean like a lobster or a shrimp - just a lot bigger than usual!

Normally measuring in at between 2-3cm, the giants discovered deep underwater by the scientists are about 10 times bigger.

The largest measured in at 34cm - which one expert compared to like finding a cockroach that's a foot long!

The discovery was made after scientists, trying to discover more about what's down at the bottom of the ocean, set traps deep below the surface of the water.

Experts used to think that life wouldn't survive at these depths, miles and miles down - but more and more types of creatures are now being discovered that love living down there.