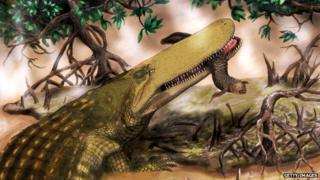 It's a crocodile, but not as we know it.

It's been named 'Shieldcroc': an ancient, extinct crocodile that's been discovered by scientists studying fossils in Missouri in the US.

It gets its name from its giant armour-plated head that may have been used to trap fish.

It lived about 95 million years ago, and may have grown to a massive 9m (30ft) long - much bigger than modern-day crocodiles.

An average-sized saltwater crocodile alive today is about 5m (16ft) in length, but they can grow as large as 7m. 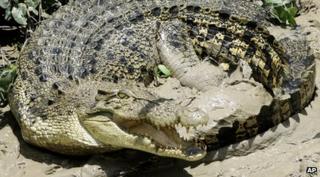 Shieldcroc's thick-skinned shielded head could have been used to attract mates, put off enemies and even control how hot or cold it was.

But scientists also think its long head, which could have measured up to a metre and a half long, may have been used to catch prey, too.

"We believe Shieldcroc may have used its long face as a fish trap," said Nick Gardner, one of the researchers on the team.

"It is possible that it lay in wait until an unsuspecting fish swam in front of it. Then, if it was close enough, Shieldcroc simply opened its mouth and ate the fish without a struggle, eliminating the need for strong jaws."

The fossils of Shieldcroc were discovered in Morocco, and the unusual looking creatures would have been around at the same time as many dinosaurs.

Beat the boredom this summer with these top tips