The man who was in charge of a big bank that nearly went bust has had his 'Sir' removed.

The decision was taken by the Queen because it was decided he made some really bad decisions and didn't help the Royal Bank of Scotland when he was the boss.

The Prime Minister said is was the right to remove the 'Sir', but some banking experts say it's not very fair.

To be able to put a 'Sir' or 'Dame' in front of your name you have to be awarded a knighthood by the Queen. 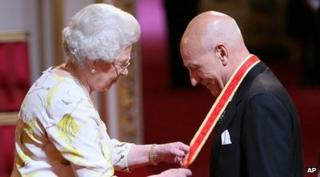 Knighthoods are only given to people who have done great things in their lives.

Fred Goodwin was given one for his work while he was in charge of one of the biggest banks in the UK.

But back in 2008 the bank got into big money trouble - and the government had to use money from ordinary people to save the bank.

This meant there was less money to spend in other areas - and lots of people lost their jobs.

Fred Goodwin was the man in charge when lots of people at Royal Bank of Scotland made bad decisions that meant the bank got into trouble.

So now the Queen has decided he doesn't deserve his knighthood anymore.