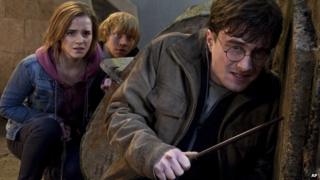 Scientists are a step closer to inventing an invisibility cloak like the one worn by Harry Potter.

Researchers have managed to "cloak" a 3D object to make it invisible from any angle.

But at the moment it's only effective within the microwave region of the electromagnetic spectrum - so we wouldn't be able to see it working.

Currently the technique only works on simple objects and can't hide complex shapes and materials like a person.

Scientists want to develop the technique so it works within the visible light region so we'd be able to see the cloak working with our own eyes.

What is the electromagnetic spectrum?

The reason why something looks the way it does is all down to the way it reflects and absorbs radiation.

There are many types of radiation all made up of different waves which interact differently with objects.

These waves move at different speeds, have varying lengths and occur at different times. Together they make up the electromagnetic spectrum.

Because of this, radiation has many different uses and dangers all depending on wavelength and frequency.

How does the invisibility cloak work?

The invisibility cloak works by reversing the way these waves are reflected to give the illusion that an object doesn't exist.

At the moment the 'cloak' can only reverse the process of the reflection of microwaves. 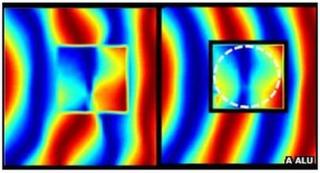 Other
The box on the left shows a visible object, disturbing the radiation; the square on the right is 'cloaked'

Scientists now need to figure out how to reverse the process of the reflection of visible light - when they've cracked that, Harry Potter's invisibility cloak could become a reality.